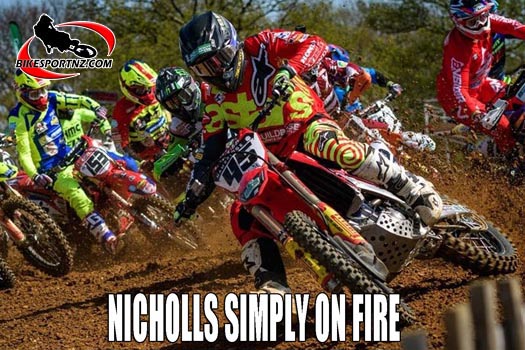 Britain’s Jake Nicholls made many friends when he raced in New Zealand in 2011 and 2013, but his fan base at home too is now possibly at an all new high as he heads the motocross scene in his native England as well.

Following the fifth and penultimate round of the 2018 British MX Nationals at Canada Heights at the weekend, Nicholl and two of his Buildbase Honda team-mates now occupy the top positions in the MX1, MX2 and 250F MXY2 class championships. With just the final round of the Michelin-sponsored series to go, at Cusses Gorse on September 2, Jake Nicholls leads MX1 by 31 points, Josh Gilbert has edged into an eight-point lead in MX2 and Callum Green – despite a big crash in his opening moto – heads the 250F MXY2 division by 51 points.

Following his American adventure when he raced to 10th at the seventh round of the Lucas Oil Pro Motocross Championship at RedBud last weekend, Nicholls was in great form and ran a comfortable 1-1 despite the intense heat and teak-tough Kentish track.

As the highest-placed Pro class Fastest 40 finisher he also won the Steven Lenoir Memorial Trophy that’s been introduced in 2018 to commemorate the French fan-favourite who tragically died last year.

“I’ve had a real good week practising – I’ve finally got my track in good condition – leading up to this and it showed today,” said Jake. “I had two good starts and just cracked on really. We had a small problem so I went out on my spare bike in the second race which was a little bit of a fight but I still won it fairly comfortably.

“It was pretty hot but my fitness felt good and I didn’t get tired so it was nice to get back to winning ways.

“They did a memorial for Steven Lenoir and I won that which was really cool. He was a great competitor so to win something like that is really important to me. It means something.”

In the MX2 class Josh ran 1-2, surviving an off-track excursion in race two, to take second overall and move into the championship lead.

“Overall I’m really happy about how today went,” he said. “I was quickest in practice and I felt like I was the fastest MX2 rider in both races and I’m now leading the championship going into the last round.

“I had a really good start in race two and ended up going around the second corner in second behind Jake. As I went down the first hill I was side-by-side with Mel Pocock and I went wide and he went tight but he drifted across and I ended up going down.

“I had to get up and come through the pack but I still managed second so I’m happy.”

In the 250F MXY2 class Callum Green had a big crash in Saturday’s opening moto but bounced back with a third and two wins which ensures he keeps his championship lead.

“Jake was on rails all day today and controlled both races comfortably,” said Ryan Thorpe, who was standing in for his team boss father Dave. “Josh was riding great but he was forced to battle through in race two after he went off the track on the opening lap.

“Callum showed what he’s made of after a big crash yesterday. He was riding in a lot of pain today but managed to score good points and as result Buildbase Honda riders are leading the MX1, MX2 and 250F MXY2 classes going into the final round.”